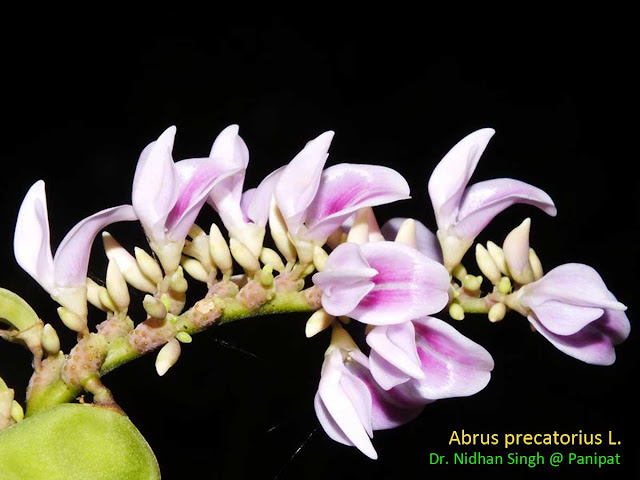 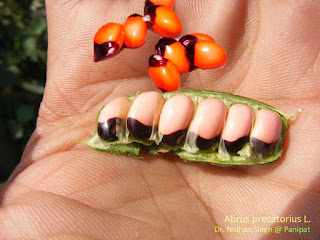 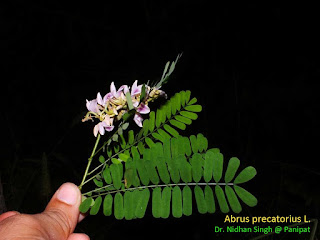 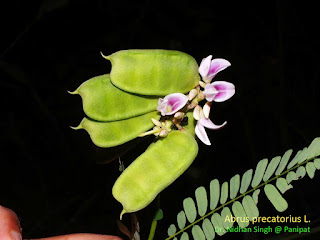 
Alopecia, dryness of mouth, colic (therapeutic uses based on classical texts from the seventh century to the sixteenth century). The petroleum ether extract of the root at 1–5 days post-coitum prevented nidation in up to 100% of albino rats. 95% ethanol extract of root (orally) at 10.0 mg/kg showed an anti-estrogenic effect. Abruquinones A, B, and D exhibit platelet  aggregation and A, B, D, and F show strong anti-inflammatory and anti-allergic effects. 70% ethanol extract of fresh root (intraperitonealy) showed anticonvulsant and CNS depressant activity at variable doses in mice. The root was used as a snuff in masosinusitis (Vrindamadhava, sixth century). The root was chewed for pain due to dental caries (Rājamarttanda, eleventh century). Massage and snuff of the root and seed extract in oil was prescribed for treating chronic cervical lymphadenitis (Bhāvaprakasha, sixteenth century). Hot water extract of the root is taken orally as an emmenagogue. In Taiwan, a decoction of the dried root is given internally to treat bronchitis and hepatitis. A decoction of the root and leaf sap is taken orally for asthma in Tanzania. Leprosy/obstinate skin diseases; ulcer; diseases of the nervous system; baldness (therapeutic uses based on texts from the fifteenth to sixteenth century). In leprosy, a paste of the seeds with butter was applied topically; in sciatica, stiffness of shoulder, and paralysis, the affected region is incised with a razor and a paste of the seeds was applied thereon; in baldness, the scalp was incised and a paste of the seeds was applied frequently; for treating scrofula, oil extract of seeds and root; for dandruff, oil extract of seeds and Eclipta alba was prescribed. Abrin has been studied for its cytotoxic effect on tumor cells, as well as for sterility, treat- ing prostate and breast cancer  and as a “molecular probe” to investigate cell function. Experimentally, seed extracts showed anti-fertility activity in rats; adversely influenced pregnancy and the fetus in mice; and caused irreversible impairment in human sperm motility. [Ayurvedic Pharmacopoeial Plant Drugs: Expanded Therapeutics]

Used in Ayurveda, Sidha and Unani. High toxicity. Seeds poisonous, highly toxic, often used criminally; a single well- masticated seed can kill an adult human; abrin is regarded as one of the most deadly plant toxins known. Plant antibacte- rial, contraceptive, antiallergic, antimalarial, febrifuge, anti- inflammatory, expectorant, insecticide, anti-schistosomiasis, molluscicidal. Root said to be emetic and useful in poisoning, an infusion used for procuring abortion; decoction of fruits of Pedalium murex with the roots of Abrus precatorius used as oral medicine to cure syphilis. Leaves or roots used for chest complaints, pleurisy; juice of fresh leaves on scabies and leprosy; dried leaves refrigerant; leaves applied on swol- len tonsils; leaf juice mixed in water taken for cough. Roots, stem and leaves for the treatment of flu, cough, fever; roots used for expelling hookworm; roots infusion or juice used for procuring abortion; soaked crushed roots decoction taken to treat leucorrhea. Seeds antiseptic, abortifacient, tonic, anti- malarial and antiinflammatory, poultice applied externally to cure mastitis and galactophoritis; paste of seeds said to decrease fertility in women, the lady will not get pregnant; seed paste with seeds of Albizia lebbeck given to cure cata- ract; seeds ground, brewed and taken as a cure for asthma; seed paste when placed in cotton and inserted in vagina causes abortion, also criminal abortion. Veterinary medicine, whole plant extract given orally for retained placenta; the leaves of this plant and the leaves of Calotropis procera are mixed, burnt and the ash given to goats after delivery; pounded leaves decoction given for insect bite; leaf paste a germicide to dress wounds in domestic animals; leaves extract given to cure anthrax, in insect bite, in retained placenta; crushed roots applied to cure white eyes of the cattle; powdered seeds given with water to treat liver disorders, poisoning and ner- vousness; seeds paste applied on yokegall, seed powder fed to ox to cure galls on the neck. Used in religion and magico- religious beliefs and performances, amulet from the roots; a piece of root tied round the wrist is believed to prevent skin diseases; Tantric rituals, rosaries made of seeds; a traditional remedy through plant wreath, stem pieces tied on hand to treat fits. Contact therapy, or touch therapy, to cure toothache a piece or root is tied around the ear. [CRC World Dictionary of Medicinal and Poisonous Plants]

A decoction of the leaves has been prescribed for scurvy, cough, bronchitis, sprue and hepatitis and as a refrigerant. They are also applied on painful swellings, eye inflammation, cancer, syphilis and on leucodermic spots. The leaves are also effective in the treatment of coryza, cough, fever, and jaundice resulting from viral hepatitis and intoxications. The seeds have been used to treat fever, malaria, headache, dropsy and to expel worms. A decoction of the seeds is applied for abdominal complaints, conjunctivitis, irachoma and malarial fever. Central Africans use powdered seed as an oral contraceptive/ It is also used to lower high blood pressure and relieve severe headache. The seeds are very toxic and can be applied externally to treat bacterial infection and accelerate the bursting of boils and to cure mastitis and galactophoritis. The seed has purgative properties and is used as an emetic, tonic, aphrodisiac, and for nervous disorders. The poultice can be used as suppository, abortifacient, or tonic for pregnant women and children and to treat severe headaches. Water from the boiled roots is used to cure cough, bronchitis, sore throat and also applied as an emetic agent. [A Guide to Medicinal Plants: An Illustrated, Scientific and Medicinal Approach ]

The leaf decoction is used for treatment of coughs, constipation, colic, and general pains. The leaves are chewed to relieve hoarseness and bronchial constrictions; the vapor from crushed leaves boiled with water is used to treat eye inflammation. The aqueous extract of the seed is used for the treatment of cancer of the epithelioma and as a vermifuge and an abortifacient. A single dose of the powdered seeds acts as a long-acting contraceptive, with the effect lasting up to  menstrual cycles. The seed infusion has been employed to hasten labor and for treatment of conjunctivitis granulosa and trachoma. The entire plant is drunk for treatment of venereal disease, headaches, and snakebites. A poultice prepared from the seeds of Abrus, salt, and the unripe fruits of Musa paradisica is applied topically to boils and abscesses. [Handbook of African Medicinal Plants, Second Edition]

Ingested seeds generally remain intact as they pass through the gastrointestinal tract without releasing any toxin and causing any toxicity. However, if the seeds are chewed, pulverized, or digested (i.e., if passage through the gastrointestinal tract is delayed), then the toxin is absorbed by intestinal cells, causing mild to severe gastrointestinal toxicity. Symptoms depend upon the amount of toxin exposure and include nausea, vomiting, abdominal cramping, diarrhea, and dehydration. Variations in the severity of toxicity may be related to the degree to which the seeds are ground or chewed before ingestion. Parenteral administration (such as by injection or inhalation), or perhaps large ingestion, may produce life-threatening systemic ﬁndings, including multisystem organ failure, even with small exposures. [Handbook of Poisonous and Injurious Plants, 2nd Ed]

Ethnomedicinal uses: fresh leaves are chewed to cure mouth blisters. Seed powder is used as an antifertility drug by both males and females. A high dose of seed powder is considered fatal. Ethnoveterinary medicinal uses: the powder of two to three seeds is given to animals with bread two to four times a day for the disposal of the placenta following the birth of a baby.  [Herbal Drugs: Ethnomedicine to Modern Medicine]

Grind  the  roots,'  make  small  pills,  encase  the  pills  in molasses and eat the same to treat night-blindedness; Make  a  plaster  by  grinding  the  roots  of  white-fruited variety  and  apply  the  plaster  on  the  painful  part  of inflammated sections of the gum; To treat white-coloured urine they drink a mixture made by grinding roots of the following: White-fruited A.  precatorius, Horticultural, Medicinal and Aromatic Plants (b)  Indigofera pulchella, (c)  Panicum repens and (d)  Spatholobus roxburghii; To treat gravel they drink a mixture made of the following: Roots of A. precatorius, (b)  The refuse of molasses, (c)  Exudation from a sapling of Diospyros  tomentosa, (d)  Exudation from Acacia catechu, (e)  Little  saltpeter,  and (f)  Pinch of sulphur; To treat the variety of childbed complaints (usually caused by anaemia) characterized by profuse diarrhoea, roots of A. precatorius are used in preparing two different varieties of mixtures; the ingredients of the mixtures are given below: First  variety:  roots  of A.  precatorius,  Elaeodendron roxburghii,  Coix  lachryma-jobi,  Piper  longum,  Ruellia suffruticosa, white onion, rhizome of Zingiber officinale; (b)  Second variety: roots of A. precatorius,  Coix lachrymajobi,  Embelia  robusta,  Piper  longum,  bark  of Casearea tomentosa,  Elaeodendron  roxburghii,  Gmelina  arborea, Emblica  officinalis,  white  onion,  leaves  of  Ocimum sanctum, rhizome of Curcuma angustifolia and Zingiber officinale - all  these are ground together, boiled and mixed with the refuse of molasses; Roots as abortifacient and used in paralysis; Apply leaf-paste  with lime-water (2:  1)  on swelling of glands; Grind  the leaves of white-flowered A.  precatorius,  warm slightly and plaster on the loins to kill pain there; Grind leaves of A. precatorius along with leaves of Lawsonia alba and Tamarindus indica (1: 1: 1), add a little salt, boil a little and apply the plaster on the whole body to get relief from muscular pain caused by over-exhaustion; Make a paste of leaves of A. precatorius along with roots of Carissa carandas and Gossypium arboreum, warm the paste slightly and plaster the same over the whole body of the patient suffering from stealth convulsions; A Salubrious Perspective of Medicinal Plants  Leaf-paste in leucoderma; Seed-paste in skin diseases; Seeds after  some processing as  contraceptive.  Paste in gonorrhoea. Oraon: dried root-powder as mild purgative. [Horticultural, Medicinal and Aromatic Plants]

In Burma, the roots of Abrus precatorius L. are used to relieve cough and to adulterate liquorice. In China, the seeds are used to induce vomiting, relieve the bowels of costiveness, expel intestinal worms, stimulate the secretion of sweat, and promote expectoration. In Malaysia, a decoction of the leaves and roots is drunk to relieve cough. In Vietnam, a decoction of about 10 g of the roots, stems and leaves is drunk to treat fever, coryza and jaundice, relieve cough, and counteract poisoning. The seeds are used to treat infected skin, mastitis and galactophoritis, heal boils and soothe inﬂammation. A number of Asian women living in UK use the seeds to abort a pregnancy, even though these seeds are poisonous. Note that the seeds of Abrus precatorius L. were ofﬁcially used in Western medicine [Medicinal Plants: Drugs For The Future? ]

Stem:  Bark  decoction  for  stomachache,  thrush,  colds,  coughs,  sore  throat  and  asthma;  emollient; extract for cancer treatment. Stem and Leaf: In French Guiana, the stems and leaves are  mixed with the leaves, stems and roots of Zea mays for a tisane used to remedy mild inflammations  of  the  urinary  tract,  diarrhoea,  aphthae  and  hoarseness.  Leaf:  Boiled  with  leaves  of  Tamarindus  indica,  Annona  muricata  and  Lantana  camara  in  a  syrup  for  chest  colds.  Seed:  Decoction  for  chronic ulcers and ophthalmia, specifically trachoma of the conjunctiva. Root: Liquorice substitute.  CHEM:  Seed poisonous, containing the toxic abrin and abric acid. Plant extracts have been used as  an effective oral contraceptive. [Medicinal Plants of the Guianas (Guyana, Surinam, French Guiana) ] 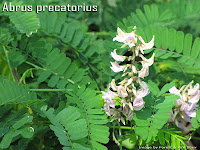