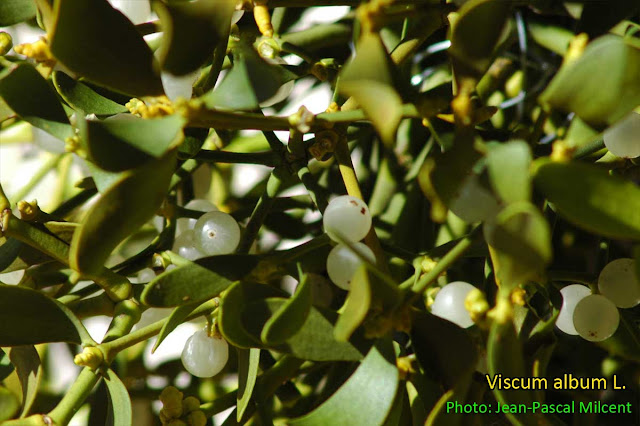 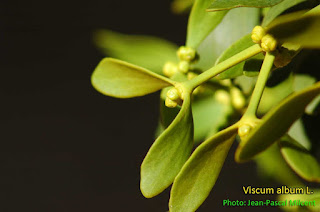 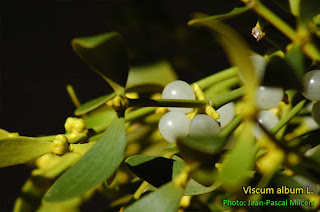 This parasite grows primarily on the trunks of deciduous trees, particularly the apple. Stems are much branched, and the leaves are 2 to 3 inches long, thick, leathery, and usually a pale yellowish-green. The fruit is a sticky white berry. [Handbook of Poisonous and Injurious Plants, 2nd Ed]

An antispasmodic nervine. The infusion is given with benefit in epilepsy, fits, paralysis, and other diseases of the nervous system; it has been employed in tooth and face aches, neuralgia, and similar complaints of the bead and face, but does not appear to have found such successful employment in the latter complaints as in the more serious and distressing ones already enumerated. It is popularly supposed that the mistletoe growing upon the oak is of greater efficacy as a medicine than that growing elsewhere; but in actual practice it is found that no difference exists whatever between that growing upon this particular tree and that derived from any other source of growth. As the properties of mistletoe by exposure to the air become considerably impaired, it should always, after drying, be preserved in as air tight a condition as possible. [Botanic Pharmacopoeia]

Used in Ayurveda and Unani. Whole plant as a poultice for the treatment of muscular pain; plant decoction given in body ache and joint pain; whole plant paste applied on fractured bone as a plaster. Leaves contraceptive, for infertility and sterility; leaves paste applied on abdomen for abortion. Extract of the leaves and berries in the treatment of hypertension, hysteria and epilepsy. [CRC World Dictionary of Medicinal and Poisonous Plants]

The leaves of the plant have special value in cases of epilepsy (convulsions during unconsciousness), hysteria (nervous condition marked by alternate crying and laughing, usually during emotional stress), and other nervous conditions. This herb acts as a tonic and is also a narcotic, tending to induce a stupor, sleep or unconsciousness. It has also been recommended for female ailments, including hemorrhages of the uterus, amenorrhea (cessation of menstruation) and dysmenorrhea (painful or difficult menstruation). It has also been recommended as a heart tonic in cases of typhoid fever and has also been suggested for excessive or high blood pressure. [Encyclopedia of medicinal herbs, with the herb-o-matic locator index]

Highly valued as a nervine and antispasmodic. Mistletoe leaves are given in hysteria, epilepsy, chorea and other diseases of the nervous system. As an anti-spasmodic and tonic it is used in cardiac dropsy. [Herbal Manual]

Mistletoe is stated to possess hypotensive, cardiac-depressant and sedative properties. Traditionally, it has been used for high blood pressure, arteriosclerosis, nervous tachycardia, hypertensive head- ache, chorea and hysteria. Modern use of mistletoe preparations is focused on use as a treatment and as an adjuvant treatment in cancer. Clinical studies of mistletoe preparations have assessed mistletoe preparations as a treatment, or as an adjunctive treatment, in patients with different types of cancers. A small number of other clinical trials have been conducted involving patients with chronic hepatitis C infection, human immunodeficiency virus (HIV) infection and respiratory infections. [Herbal Medicines 3rd Ed]

The main therapeutic value of mistletoe lies in treating high blood pressure, although it has traditionally been used to treat epilepsy, insomnia, and tinnitus. [Herbal Remedies]

Vasodilator, cardiac depressant, tranquiliser, stimulates the vagus nerve which slows the pulse, anti-inﬂammatory, diuretic, immune enhancer, antineoplastic. Used for hypertension and tachycardia, as a nervine tonic. The extract of leafy twigs is antiinﬂammatory exerting an action upon capillary permeability and oedema. It stimulates granulation and the neoformation of connective tissue. [Indian Medicinal Plants An Illustrated Dictionary]

It is given by the Hakims in enlargement of the spleen, in cases of wound, tumour, diseases of the ear, etc. [Indian medicinal plants]

The leaves are a stimulating and relaxing antispasmodic nervine. It seems to give its especial influence where it is most needed by the vital force. During parturition when the pains are light, it produces prompt uterine contractions and well anticipates hemorrhage. It is also valuable in all uterine hemorrhages, and assists much in the expulsion of the placenta when retained. As an antispasmodic it will be found useful in the relief of the extra, effort put forth in asthma, epilepsy and other spasmodic conditions. Nervine, tonic and narcotic properties make it of great value in hysteria, St. Vitus Dance and other nervous diseases. [Physio-Medical Therapeutics, Materia Medica and Pharmacy]