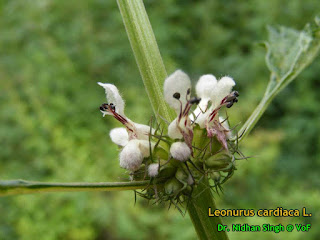 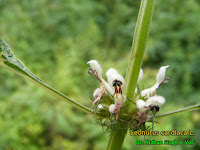 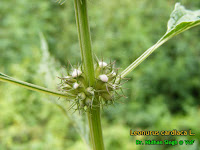 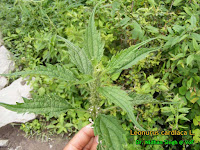 Description: perennial plant is 2-5' tall and sparingly branched below the inflorescence. The stems are 4-angled, heavily ridged, and slightly pubescent. The opposite leaves are variable in size and shape, although they all have long petioles that are slightly pubescent. The lower leaves often have 5 cleft lobes and several coarse teeth; they are up up to 4" long and 3" across. The middle leaves have 3 cleft lobes and a few coarse teeth; they are up to 3" long and 1½" across. The upper leaves are often oblong-ovate with a pair of coarse teeth; they are up to 2" long and ¾" across. These leaves are nearly hairless and have conspicuous veins along the upper surface. The base of each leaf is more or less wedge-shaped. The stems of Motherwort are normally erect, although older plants toward the end of the growing season have a tendency to sprawl.  Whorls of sessile flowers occur above the axils of the opposite leaves on the middle to upper stems. Each tubular flower is 2-lipped and about 1/3" long. The corolla is white or light pink and quite hairy on the upper side; these fuzzy white hairs exceed 1 mm. in length. The upper lip is undivided, while the lower lip has a central lobe and 2 smaller side lobes. There are usually purple dots on the lower lip and near the throat of the corolla. The tubular green calyx has 5 lanceolate teeth; it is slightly pubescent. These teeth are sharp-pointed and persistent. The blooming period occurs during the summer and lasts about 2 months. While the flowers are not noticeably fragrant, the foliage has a slightly rank odor. Each flower is replaced by 4 nutlets that are 3-sided and reddish brown or brown. The root system consists of shallow fibrous roots and rhizomes. This plant spreads by reseeding itself and vegetatively by means of the rhizomes; it often forms colonies.
Motherwort is diaphoretic, tonic, emmenagogue, nervine, and antispasmodic. It is given with thy best effects in hysterical affections, sleeplessness, delirium, and uterine pain and disorders. The usual method of administration takes the form of infusion, of which the usual  dose is given; or, in cases where this does not act with sufficient quickness, it may be given in ad libitum doses. As a tonic it acts without producing febrile excitement, giving tone to the organs and changing the morbid conditions of the secretions. It is well adapted to those cases in which a combined tonic antinervine impression is desired, but where the least excitement would be regarded with serious apprehension. In fevers, attended with nervousness and delirium, it is extremely useful; it calms the nervousness, and induces a quiet and passivity of the whole nervous system, ending generally in a healthy sleep, from which. the patient awakes refreshed and invigorated. In those nervous disorders produced by, or accompanied with, continued wakefulness or irritability of the nervous system, it acts in the most satisfactory manner. It is also employed in spinal diseases, in uterine spasm and disorders, irregularities in the menstrual evacuation, and debility of the uterine system. For all these indications it would perhaps be difficult to indicate a remedy of greater suitability. Motherwort is useful also in heart disease, palpitation, neuralgia and other affections of the heart, in which it has acquired an extensive reputation. [Botanic Pharmacopoeia]

This plant can cause dermatitis in sensitive individuals. A  fragrant  lemon-scented  oil  caused  photosensitivity  when  ingested.  Herb  stomachic,  diaphoretic,  used  for  the  female  reproductive health. [CRC World Dictionary of Medicinal and Poisonous Plants]

Flowering tops are used for ﬂ avouring beers, ales and stout. Fresh or dried ﬂowers can also be added to soups, e.g. split pea soups, and can be brewed into tea. [Edible Medicinal and Non-Medicinal Plants Vol-8]

Motherwort can be useful in reducing high blood pressure. It is also useful in rapid and irregular heart beat also heart palpitations.  Its primary use is for dealing with irregular menstruation.  I have found it to be of great benefit in dealing with the emotional instability of menopause.  Motherwort is also an effective uterine stimulator.  It can be used in con- junction with other similar herbs for inducing labor, which should only be done under the supervision of an experienced practitioner.   Motherwort is quite useful in reducing post partum bleeding or hemorrhaging.  It causes the uterus to clamp down and thus stops the bleeding.  It is equally as effective as Ergotamine in causing uterine contractions. CAUTION: Do not use during pregnancy. [God's Healing Leaves]

Leonurus cardiaca has been used as a folkloric sedative, and sedative activity as well as a hypotensive effect in normo-and hyper- tensive animals have been confirmed. It has been used clinically for hyper- tension in the USSR with good results [Herbal Pharmacology in the People’s Republic of China]

General protective against female ills,more particularly those associated with the womb and menstruation. [Medicinal Plants in Folk Tradition - An Ethnobotany of Britain & Ireland]

Traditional use:  A decoction of the aboveground parts is used to treat heart, stomach and nervous system diseases (Khalmatov   1964  ) . A tea and an infusion of the aboveground parts are used to treat nervous disorders, hypertension, hysteria, epilepsy, tachycardia, gastrointestinal, and female diseases, and are used as sopori ﬁ c, anti-in ﬂ ammatory, diaphoretic, and laxative remedies (Khodzhimatov  1989  ) .   Documented effects:  Studies show that a tincture of the herb has a sedative effect, which is twice as strong as the effect of a valerian tincture. The tincture also causes decreased arterial pressure and strengthens the contraction of uterus muscles (Khalmatov  1964  ) . Stachydrine exhibited protective effects when given to rats with experimental myocardial ischemia reperfusion injury (Ma and Yang  2006  ) . [Medicinal Plants of Central Asia Uzbekistan and Kyrgyzstan]

This herb is a pleasant, reliable, diffusive, stimulating and relaxing, antispasmodic nervine. It influences the mucous membrane, especially that of the pelvic organs. A hot infusion promotes a good outward circulation, increases the menstrual flow. It is useful in amenorrhoea and in dysmenorrhoea. when congestion is present, and in hysteria and palpitation when the patient is more or less chlorotic. [Physio-Medical Therapeutics, Materia Medica and Pharmacy]