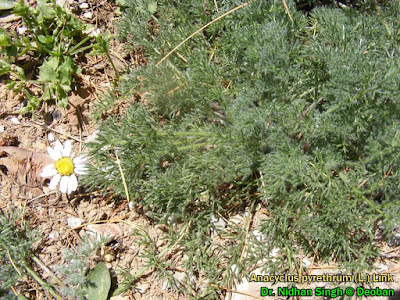 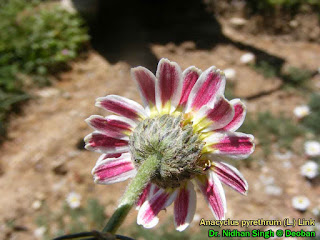 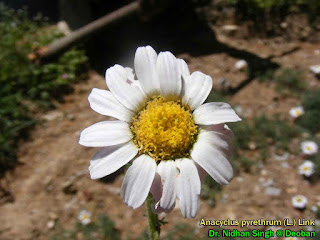 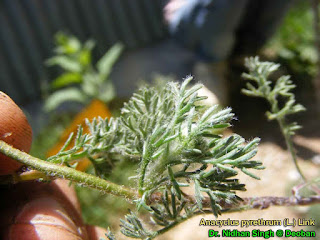 Rubefacient and sialagogue, it is employed in inflamed conditions of the mouth and fauces, for which it is frequently chewed in the mouth, producing in the action of chewing a copious flow of saliva, and quickly reducing the inflammation. The decoction forms at once a medicine, gargle, and external application for quinsy, relaxed, and sore, throat, to the relief of which it is Successfully applied. It is given in toothache, neuralgia, and in some forms of headache, more particularly in those arising from nervous disorders. It is not to be employed when, any irritation of the stomach exists, and in no case should it be exhibited in large doses. [Botanic Pharmacopoeia]

Used in Ayurveda, Unani and Sidha. Immunostimulating, insecticide, sialogogue, a tonic to the nervous system, a treatment for epilepsy, paralysis, hemiplegia, for sore throat and tonsils.  The  extracts  of  Anacyclus  pyrethrum  traditionally used in India during the preparation of chewable tobacco. Containing a volatile oil once used to relieve toothache. It is believed that application of this herb to the skin stimulates the nerve ends that may result in redness and irritation accompanied by a hot, burning sensation. Root, used as a rubefacient, is a powerful irritant to the skin; dermatitis and contact dermatitis can occur. Overdoses may result in irritation. [CRC World Dictionary of Medicinal and Poisonous Plants]

According  to  Bodding,  Santals  use  the  plant  (Santal  name  :  Akor  Kora)  as  an ingredient  of  the  medicines  of  puerperal  fever  and  menorrhagia. [Herbal Cures: Traditional Approach]

Stimulant, cordial, rubefacient.A gargle of infusion is prescribed for relaxed vulva. Root—used for toothache, rheumatic and neuralgic aﬀections and rhinitis. Roots, along with the root of Withania somnifera and Vitis vinifera, are used in epilepsy. [Indian Medicinal Plants An Illustrated Dictionary]

The root is quite stimulating to the mucous membrane and circulation. It creates a tingling sensation in the throat and excites a good free flow of saliva. It is valuable in chronic rheumatism and facial neuralgia. For semi-paralysis of the tongue or a relaxed palate, uvula or pharynx it may be used as a gargle very frequently. [Physio-Medical Therapeutics, Materia Medica and Pharmacy]
Read more »
at 9:56:00 PM No comments: