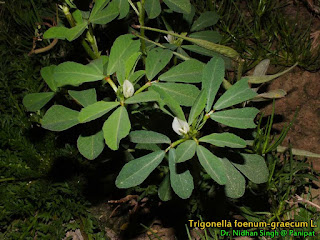 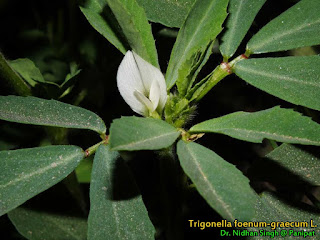 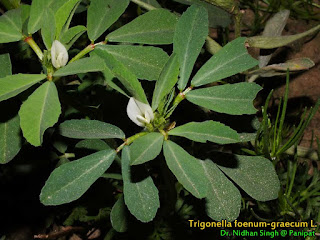 Fenugreek is a tremendous decongestant. It is good for clearing congested sinuses. Some people use it with hot flashes due to menopause. You will find that it is of great benefit in increasing lactation for nursing mothers. It is also used as a flavoring or spice. Use fenugreek for making poultices for boils or other infected external sores. Because it does have a uterine stimulant it should not be used during pregnancy except with caution. [God's Healing Leaves]

In North Africa, the seeds are used as an oral antidiabetic. The plant is used as a galactagogue in the Sudan. The leaves are used in various folk remedies for the relief of indigestion and general stomach disorders. The seeds are edible and have been used in remedies for rheumatism, chronic cough, and enlargement of the spleen and liver and as a general tonic. Extracts of the seeds are incorporated into several cosmetics claimed to have an effect on premature hair loss and as skin cleanser. [Handbook of African Medicinal Plants, Second Edition]

Said to be used for aphrodisiac, astringent, demulcent, diuretic, emmenagogue, emollient, expectorant, lactagogue, restorative, and tonic. Ecbolic and spermicidal activities have also been reported. Mucilaginous seeds are believed to be carminative, emollient, tonic, and vermifugal, and are used for chapped lips, diarrhea, oral ulcers, rheumatic conditions, and stomach irritation. Indian women believe the seeds promote lactation. Chinese use the seed for abdominal pain, chilblains, cholecystosis, fever, hernia, impotence, hypogastrosis, nephrosis, and rheumatism. Malayans poultice the seeds onto burns and use them for chronic coughs, dropsy, hepatomegaly, and splenomegaly. Crushed leaves are taken internally for dyspepsia. [CRC Handbook of Medicinal Spices]

Numerous studies were conducted to examine the role of fenugreek seeds for insulin-dependent diabetes (Type-I). In one of the studies, blood glucose levels improved significantly when the regular insulin therapy was supplemented with 50 grams, twice daily, of defatted fenugreek seeds for ten days. The fenugreek diet significantly reduced fasting blood sugar and improved the glucose tolerance test. Further, this integrative therapy resulted in an improved serum lipid profile with serum total cholesterol, LDL and VLDL cholesterol and triglycerides got significantly reduced. No indications of adverse interactions were noticed. [Herbal Cures: Traditional Approach]

Fenugreek is stated to possess mucilaginous demulcent, laxative, nutritive, expectorant and orexigenic properties, and has been used topically as an emollient and vulnerary. Traditionally, it has been used in the treatment of anorexia, dyspepsia, gastritis and convalescence, and topically for furunculosis, myalgia, lympha- denitis, gout, wounds and leg ulcers. [Herbal Medicines 3rd Ed.]

The seeds of fenugreek have been used as an appetite stimulant and for digestive disorders (including constipation, dyspepsia and gastritis). It has also been used in respiratory disorders and is said to be an expectorant. Topically, fenugreek has been used for wounds and leg ulcers, and as an emollient. It has been reported to have hypocholester- olaemic and hypoglycaemic activity. [Stockley's Herbal Medicines Interactions]

Gastrointestinal problems Inflammatory problems within the digestive tract such as mouth ulcers, gastritis, and irritable bowel will benefit from the seeds’ moistening and protective effect. For best results, first soak the seeds in water.  Cholesterol and blood sugar  Clinical evidence supports fenugreek’s use in raised cholesterol levels; however, large doses were used in the clinical trials (5–100g a day) to achieve this result. The seeds can also be used on a daily basis to help reduce blood sugar levels in diabetes. Components in fenugreek stimulate insulin as well as delay absorption of glucose. [Herbal Remedies]

Seeds—used in loss of appetite, ﬂatulence, dyspepsia, colic; diarrhoea, dysentery; enlargement of liver and spleen; and as a lactagogue and puerperal tonic. [Indian Medicinal Plants An Illustrated Dictionary]