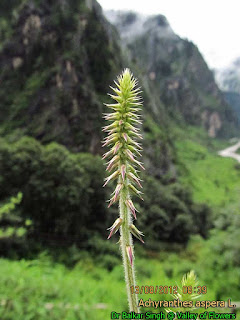 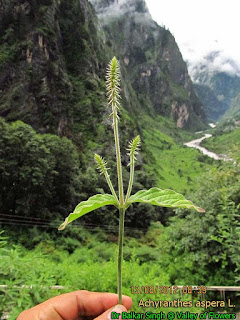 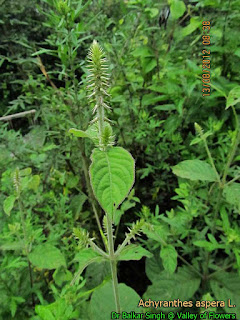 Description: Herbs perennial, 20-120 cm tall. Stem quadrangular, pubescent; nodes slightly inflated; branches opposite. Petiole 0.5-1.5 cm, somewhat hairy; leaf blade broadly obovate or elliptic-oblong, 1.5-7 × 0.4-4 mm, papery, both surfaces hairy, base cuneate or rounded, margin entire or undulate, apex obtuse, with a mucro. Spikes terminal, erect, reflexed after anthesis, 10-30 cm; rachis angular, stout, densely hairy. Bracts lanceolate, 3-4 mm, apex acuminate; bracteoles spiny, shiny, 2.5-4.5 mm, rigid, base 2-winged; wings 1.5-2 mm, membranous, margin entire. Tepals lanceolate, 3.5-5 mm, with a vein. Stamens 2.5-3.5 mm; pseudostaminodes truncate or crenate at apex, fimbriate and ciliate. Utricles ovoid, 2.5-3 mm. Seeds brown, ovoid, ca. 2 mm. Fl. Jun-Aug, fr. Oct. 2n = 42, 48, 84, 96.Used in Ayurveda, Unani and Sidha. Achyranthes aspera causes  a  dose-related  transient  cardiovascular  toxicity. Plant pungent, purgative, diuretic, used in dropsy, piles, colic, snakebite, boils and skin eruptions; whole plant decoction in rheumatism, muscular pains and arthritis; plant decoction to cure coughs; ash of the plant taken for asthma, applied on the body for the treatment of jaundice. Decoction of leaves applied externally for cuts, insect bites and wounds; leaves crushed with leaves and roots of Machilus bombycina and the juice is applied on pimples; a paste prepared with lime and leaf of nonflowering plants is applied to cure eczema; leaf infusion for the treatment of snakebite; leaves pounded, soaked in water, boiled and the liquid drunk to treat venereal diseases and also to treat colds in children; leaves juice given in diarrhea, as eye drops in hysteria. Root extract aphrodisiac and sex tonic, sedative, given for stomatitis, spermatorrhea, sterility, impotence, dystocia; root powder taken orally to check discharge of sperm with urine and to increase sexual potentiality, also given for fever and epilepsy; roots made into a paste with rhizomes of Chrysopogon aciculatus and applied on foul ulcers; powdered roots, mixed with crushed snails, applied to cure leprosy; roots ground with those of Ziziphus xylopyrus and the paste given after delivery as an antiseptic, tonic, postpartum remedy; an infusion astringent, for diarrhea, dysentery; a decoction in the oral treatment of leprosy, also given to women after menstrual period for the control of fertility, used as an abortifacient; roots paste given for easy delivery and as antidote, anti-venom, also applied in painful scorpion stings; pounded roots for malaria; crushed roots applied on wounds. Powdered roasted seeds mixed with honey given for cough; seed powder given in piles, also smoked for respiratory disease. Used in religion and magicoreligious beliefs as magical cure for jaundice, intermittent fever and for safe delivery of pregnant mother; plant infusion given as bath in sickness which is believed to be due to ghost; root tied on head and hair of pregnant woman to induce easy and normal delivery; smelling fresh roots is believed to hasten delivery; ingredient of Patra pooja in different religious pooja ceremonies, in Ganesh-pooja; dried inflorescence used by orthodox Hindus in sacred pyres; roots worn on the right arm for males and left arm for females to cure periodic fevers, string should be folded seven times and twined. Veterinary medicine, whole plant given to cows after delivery for taking out the remaining portion of placenta; whole plant juice given as diuretic; plant juice applied for maggot wounds; spikes made into a paste and applied on boils, ulcers and wounds; leaves ground with saffron used as eye drops for opacity of cornea; crushed leaves juice applied on the wounds, burns, on maggot wounds; roots extract given in insect bite. [CRC World Dictionary of Medicinal and Poisonous Plants]


The root is used as a hemostatic agent to stop wound bleeding. A decoction of the roots or stem bark is administered to children for constipation. The leaves, when fire cured like tobacco, are used as an embrocation for sprains and headache. When boiled, the steam is inhaled for the treatment of severe catarrh and colds. The decoction of the root bark is taken as a remedy for venereal diseases. A poultice made from the ash of the burned leaves is applied on boils and as an ointment for scabies; the ash mixed with honey is administered for coughs. The root infusion is used as an emetic and mixed with lime as a remedy for bronchitis, malaria, and helminthic infestation. The root has also been dispensed as a gargle for toothache, as a snakebite topical remedy, for the treatment of heartburn, to prevent miscarriage in pregnancy, and as a poison antidote to control vomiting. In India, the plant extract is used for the treatment of infectious diseases and in the management of leprosy. [Handbook of African Medicinal Plants, Second Edition]Root  is  as  abortifacient.  Ethnic  communities of  Arunachal Pradesh and Tharus  employ  root  to  women for  treatment of antifertility.  Ethnic  communities  of Orissa  and Sagar  (Madhya Pradesh)  use  root in bleeding in delivery. Asurs, ethnic Communities of Meghalaya and Orissa use root for  fascilitating  childbirth.  Since  the  time  of  the  Atharvaveda  this  species  is regarded  as  medicinally  important,  and  in  Ayurvedic  system  it  is  used  for treatment of many diseases.  In homoeopathic  system, it is  used  in menorrhagia. In  allopathic  system,  too  different  parts  of  the  plant  are  used  for  treatment  of various  diseases. [Herbal Cures: Traditional Approach]


Ethnomedicinal uses: decoction of two to three teaspoon of leaf powder is taken for stomachache and to ease constipation. The powder of roasted seeds is taken to cure whooping cough. Seeds are boiled in milk and taken for 3 d as a tonic to cure sexual debility and hydrophobia. The ash of the dry plant is mixed with honey and taken orally for cough, asthma, urinary complaints and stomachache. Root powder is boiled with mustard oil and used for massage by the tribals in rheumatic pain. Infusion of the whole plant is taken in liver and renal complaints. Root extract is taken orally as an antidote to scorpion bite. Ethnoveterinary medicinal uses: a half cup of root extract is given to animals to increase milk production. It acts as a lactogogue. Root extract is also given to sick animals as a tonic. Seed powder is given to animals to treat dysentery. [Herbal Drugs: Ethnomedicine to Modern Medicine]


In Indonesia, a paste of Achyranthes aspera L. mixed with the bark of Alyxia stellata (Roem.) et Schult. and the fruits of Foeniculum vulgare Gaertn. is applied to the body to treat convulsion. A decoction of this mixture is drunk to stop dysentery. Achyranthes aspera L is used to promote urination and it is an astringent remedy. In Malaysia, Achyranthes aspera L. is used to resolve inﬂamed parts, lower blood pressure and to counteract infection of the urinary tract. In the Solomon Islands, a paste made from the powdered leaves is applied to boils and the roots are used to treat swollen legs. In Vietnam, roasted leaves are used externally to heal burns and an infusion of the roots is ingested to mitigate colic. In India, a decoction of Achyranthes aspera L. (1 in 15; dose 30 mL to 60 mL) is drunk to promote urination and the seeds are eaten to treat piles. The white variety of Achyranthes aspera L. is said to be more efﬁcient against piles, ascite and dysentery whereas the red variety is preferred for ulcers. [Medicinal Plants: Drugs For The Future? ]


Therapeutic uses: The whole plant and especially the roots, characterized by their anti-inflammatory and uterine stimulant activity, are prescribed in the therapy of rheumatism, contusions, lumbago, osteodynia, dysuria, post-partum haematometra and dysmenorrhoea. The daily dose is 8 to 16g in the form of a decoction. The drug is used on its own or in combination with some other plants. [Medicinal Plants in Viet Nam]


Medicinal Uses of Achyranthes aspera in Sindh: Leaves are used against pneumonia and asthma.
1. Method of use for pneumonia: 1-2 leaves are boiled with 500 mL of water keep boiling until the volume is reduced to half. And give 1 spoon of that water after cooling twice a day.
2. Method of use for Asthma: Boil 200-250 g of fresh leaves in 1 litre of water keep boiling for 10-15 minutes and drink that water 3 times a day for 15-20 days. [Medicinal Plants of Sindh : Indigenous Knowledge and Scientific Facts] 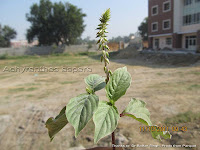