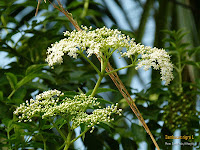 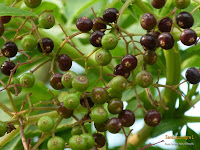 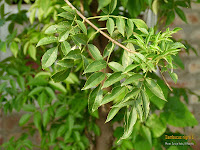 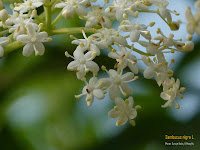 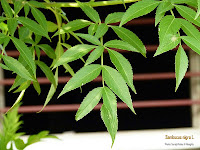 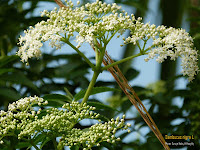 Sambucus canadensis is accepted name according to Plantlist Wikipedia listed as S.nigra and more than 300 publications are mentioned it as S. nigra.

Elder flowers are diaphoretic and sudorific in proportion to the quantity administered, but find their principal employment in external applications, as for fomentations and poultices to swellings, and in the earlier stages of gatherings, boils, and abscesses, to discuss any collection of lymph; an ointment, also, is prepared from them, which is suitable in those cases where a cooling and emollient application is desired, as for cracks and chaps in the hands, lips, nipples of the breasts, and for similar purposes. The infusion is useful, and receives somewhat extensive employment, as a wash, in weakness of the eyes, dimness of vision, and twitchings of the eyelids. It is also of considerable reputation as an article of the toilet, as a wash for the complexion, which it is said to beautify and improve. The berries are alterative, diuretic, and aperient, and are of good service in affections of a rheumatic or gouty nature, and for those affections generally in which alteratives are indicated, and in dropsical complaints. The wine known as "elder," or "elderberry wine," is produced from these berries, and is adapted, in moderate employment, for all the purposes of the infusion. The inner bark is a strong diuretic and cathartic, similar in its properties to the berries, but acting with more celerity, and is more powerful in its operation, both upon the urinary organs and the bowels. The leaves exercise only a very strong and violent cathartic action upon the system, and are, therefore, considered unsafe for internal exhibition, having been known to produce strong inflammatory symptoms. Externally, they receive employment for the same purposes as the flowers already described. Sambucus ebulus, dwarf elder, known also as ground elder, of which the leaves only are employed, is an active diuretic, suitable in dropsical affections and suppression of the urine. It is exhibited in infusion. [The Botanic Pharmacopoeia]

In Tunisia plant is used for Rheumatism, skin problems. [Ethnomedicinal Plants Revitalization of Traditional Knowledge of Herbs]
Flowers or aerial parts of Sambucus species (Caprifoliaceae) are used in traditional medicines for various ailments and act as diuretics, laxatives, diaphoretics and expectorants. In Turkey, there are two species: S. nigra and S. ebulus. Leaves of both species are known as karahekim or Black Physician by the inhabitants in some districts, referring to their diverse biological activities and the blackish appearance of stems during drying, caused by their rich coumarin content and black fruits. In particular, black fruits are used for the treatment of haemorrhoids, the leaves of both species against snake bite, or a bath prepared from the fresh herbs or leaves is used to palliate rheumatic and catarrhal symptoms (Sezik et al., 1991). It has also been reported that S. ebulus herb is used in the treatment of gastric ulcers (Sezik et al., 1992). A potent anti-inflammatory activity was determined against carrageenin-induced inflammations for the ethanolic extract of S. nigra leaves (Yesilada and Sezik, 1990). Methanol extract as well as chloroform and n-butanol fractions showed remarkable inhibitory activity on TNF-a, but remained ineffective on IL-1a and 1b (Yesilada and Sezik, 1990). Anti-inflammatory activity of S. ebulus aerial parts was evaluated by Yesilada (1997a) by using in-vitro (phospholipase A2-inhibitory activity) and in-vivo test models (carrageenin- and serotonin induced hind paw oedema, adjuvant-induced arthritis). The methanol extract and its n-butanol fraction were found to possess significant anti-inflammatory activity. Through bioassay-guided fractionation and isolation procedures on butanol fraction, chlorogenic acid was isolated as the anti-inflammatory principle. However, this was not the sole active ingredient, since the chloroform and remaining aqueous fractions were also found to possess significant activity. It was noteworthy that methanol extract and butanol fraction showed remarkable activity in the carrageenin-induced paw oedema model when applied topically, which supported the traditional application mode: a poultice prepared from the leaves is applied externally to the affected joint. The methanol extract showed a more pronounced inhibitory activity than aqueous extract against IL-1a and 1b. This extract was further fractionated through successive solvent extractions. The hexane fraction and, to a lesser degree, the chloroform fraction showed inhibitory effects on IL-1a, 1b and TNF-a (Yesilada et al., 1997c). These data also supported the folkloric application that non-polar ingredient(s) might be active. However, in a recent study, Ebrahimzadeh et al. (2006) reported that the hexane extract from the leaves did not show any anti-inflammatory activity against the carrageenininduced oedema model. This is probably due to the inconvenience of the carrageenin model in revealing the activity. In a previous study, the hexane fraction was also found ineffective against paw oedema models (Yesilada, 1997a). In Iran, rhizomes of the plant have also been used for similar purposes and Ahmadiani et al. (1998) evaluated possible analgesic and anti-inflammatory effects of S. ebulus rhizome on chronic (formalin test) and acute (tail flick) pain models in rats. Accordingly, a significant analgesic activity was reported for methanol extract at 100 and 200 mg/kg intraperitoneal doses, which act through a central mechanism. [Evaluation of Herbal Medicinal Products]