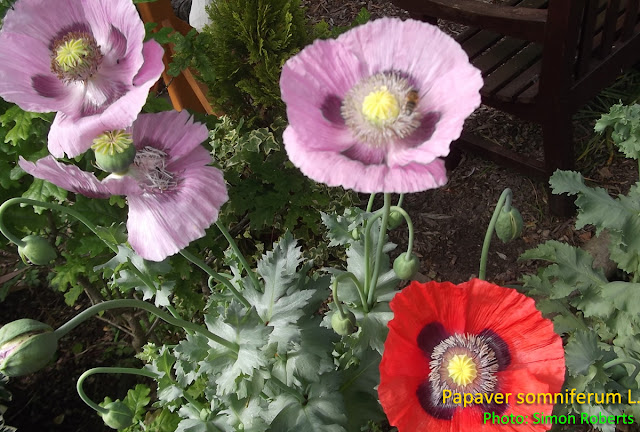 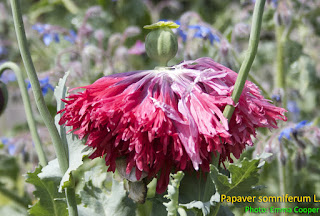 Poppy (Papaver somniferum). The traditional use of poppy to induce sleep and reduce pain led to the discovery and subsequent isolation of the alkaloid morphine. [American Herbal Pharmacopoeia: Botanical Pharmacognosy—Microscopic Characterization of Botanical Medicines]

Used in cough and diarrhea (therapeutic uses based on texts from the fourteenth to sixteenth centuries). Seeds are demulcent and used in the form of emulsions as an emollient (in cough and  asthma) and as a specific aid against obstinate constipation and in catarrh of the bladder. Seed oil is used against diarrhea, dysentery and scalds. 2(a),15  Seeds are antirotozoal and spasmolytic.

A poultice of opium resin is used topically as a local analgesic for management of pain and soothing of muscle spasms. It may be applied to the temples to alleviate headache. [A Thai Herbal: Traditional Recipes for Health and Harmony]

The opium obtained from the fruits is bitter, astringent, sweet, constipating, aphrodisiac, sedative, somniferous, narcotic, myotic, antispasmodic, sudorific and nervine tonic. It is useful in cough, fever, inflammatory affections of eye, otitis, proctalgia and low back pain due to diarrhoea and dysentery. It is good for internal haemorrhages, decrease secretions, restrain tissue changes and used as analgesic. It beneficial in migraine, malaria, dysmenorrhoea, cystitis, menorrhagia and other painful conditions. Opium (the inspissated milky juice from immature capsules) is a soporific drug, given either alone or as an adjunct, in the preparation of various medicines. It acts on the CNS, induces sleep, relieves pain, develops euphoria and highly toxic in large doses. Opium available in the market is purified by steeping in cold water for 5-6 hr.  The insoluble brown latex finds application in the Ayurvedic medicine. It is prophylactic in post-operative period (50-60 mg/day). Vapours of boiling water mixed with small doses of opium, is useful in conjunctivitis. Camphorated opium (1:1) is an excellent pain killer in sprain. However, it is contraindicated for people suffering from asthma, cardiac and urinary bladder diseases. Seed oil, freed from narcotic principles is useful in diarrhoea and dysentery. [Database on Medicinal Plants Used in Ayurveda Volume 8]

Opium (the dried latex) is a potent narcotic, analgesic, and antispasmodic, and has been taken to relieve pain of various kinds. In all the main herbal traditions it is regarded as a powerfully “cold” remedy, reducing physical function and sedating or suppressing nervous activity, pain, and coughs. In view of its addictive nature, opium is mainly used after other less powerful analgesics have failed to bring relief. It is also an effective remedy for acute diarrhea and severe coughs. Pharmaceutical drugs produced from opium poppy include morphine and codeine. [Encyclopedia of Herbal Medicine]