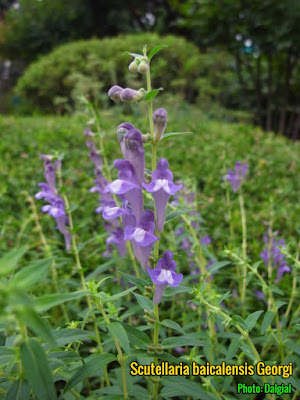 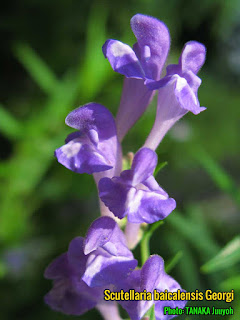 Scutellaria baicalensis (Asian skullcap, scute) root extracts are well- established inflammation modulators from traditional Asian medicine. Attention has focused on its flavonoids, wogonin and baicalein in par tic u lar, as potent infl ammation modulators. The potential for internal and topical administration of this herb to help with acne is great, though clinical trials are unfortunately lacking. [Clinical Botanical Medicine]

The drug consists of the roots, usually cut into slices is used to promote urination, to quiet pregnant uterus, stimulate respiratory organs, reduce fever, treat jaundice, diarrhea, cancer of the breast, and heal boils. In Korea, the plant is used to treat bacterial infection of respiratory and gastrointestinal tracts and fever. The plant has attracted a great deal of interest as it elaborates a series of flavones: baicalein, wooing, and oroxylina,  which  bind  antagonistly  to  the  benzodiazepine  binding  site  GABA receptor  [Ethnopharmacology of Medicinal Plants Asia and the Pacific]

Used in both Chinese and Japanese herbal medicine, baical skullcap is a major remedy for allergic and inflammatory states. In traditional terms, it clears “hot and damp” conditions such as fever and dysentery; in the West it is mainly used to treat asthma, hay fever, and allergies. [Herbal Remedies]