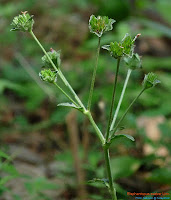 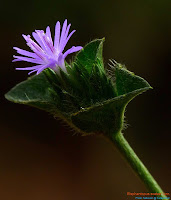 Ayurvedic Uses: Astringent, alterative, febrifuge, Antimicrobial.
In Burma, a decoction of the aerial parts is drunk to treat irregular menses. In China, the plant is eaten as a salad and is a believed to improve general health. In several Southeast Asian countries the plant is used to break fevers and prompt urination. [Ethnopharmacology of Medicinal Plants Asia and the Pacific]

The effect of aqueous ethanol extracts and the isolated compound deoxyelephantopin from E. scaber Linn. was evaluated on excision, incision, and dead space wound models in rats. The wound-healing activity was assessed by the rate of wound contraction, period of epithelialization, skin-breaking strength, weight of the granulation tissue, and collagen content. Histological study of the granulation tissue was carried out to know the extent of collagen formation in the wound tissue.

Plant—astringent, cardiac tonic, diuretic, mucilaginous, emmolient (used in dysuria, diarrhoea, dysentery. Leaves applied to ulcers and eczema. Roots—given to patients with heart and liver affections; topically in rheumatism. Root and leaf— used in dysuria and other urethral complaints. An infusion of the whole plant is used to stimulate diuresis, reduce fever and to eliminate bladder stones. The decoction is also used in peptic ulcers, swelling or pain in stomach. Plant is also used in piles and scabies. [Indian Medicinal Plants Ayurveda]