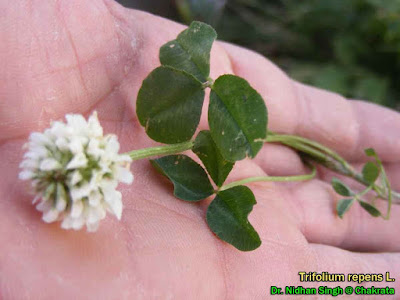 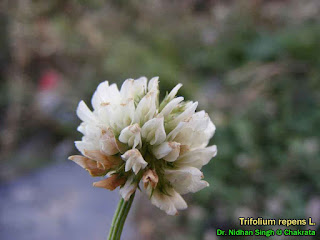 
Description: his perennial plant is about 6" tall, branching from the base. Initially, it produces several compound leaves from a short stem that grows only a little, after which this stem rapidly elongates and becomes up to 1' long. These elongated stems sprawl along the ground and have the capacity to root at the nodes. They are hairless and light green. The alternate compound leaves are trifoliate and hairless. They occur at intervals along the elongated stems and have long hairless petioles. The leaflets are obovate or ovate. Their margins are finely serrate. Across the upper surface of each leaflet are white markings in the form of a chevron (an upside down "V"), although for this species these markings are often degenerate, irregular, or absent. Each leaflet is about ¾" long and about half as wide. At the base of each petiole there are a pair of small lanceolate stipules that are light green and membranous; sometimes they wrap around the elongated stems. Each stipule is less than ½" in length.  Flowerheads about ¾" across are produced on long naked stalks (peduncles) that are unbranched and hairless. These flowering stalks are usually a little taller than the compound leaves. Each flowerhead has 20-50 flowers and is more or less globular in shape. Each flower is narrowly tubular, consisting of a green calyx with 5 narrow teeth and 5 petals that are white or pinkish white. When fully open, there is a small standard and 2 side petals that enclose the keel. The teeth of the calyx are equal to, or less than, the length of the calyx tube. Each flower has a very short pedicel. The blooming period occurs intermittently for several months, from late spring through the fall. The flowers gradually turn brown and are replaced by seedpods. Each little seedpod contains only a few seeds, which are flat, round or slightly heart-shaped, and variously colored. The root system consists of a shallow branching taproot and the rootlets formed by the elongated stems. This plant reproduces by seed or vegetatively, and often forms colonies.

Red clover is stated to act as a dermatological agent, and to possess mildly antispasmodic and expectorant properties. Tannins are known to possess astringent properties. Traditionally red clover has been used for chronic skin disease, whooping cough, and specifically for eczema and psoriasis. [Herbal Medicines 3rd Ed]
61 Published articles of  Trifolium repens
Read more »
at 10:40:00 PM No comments: