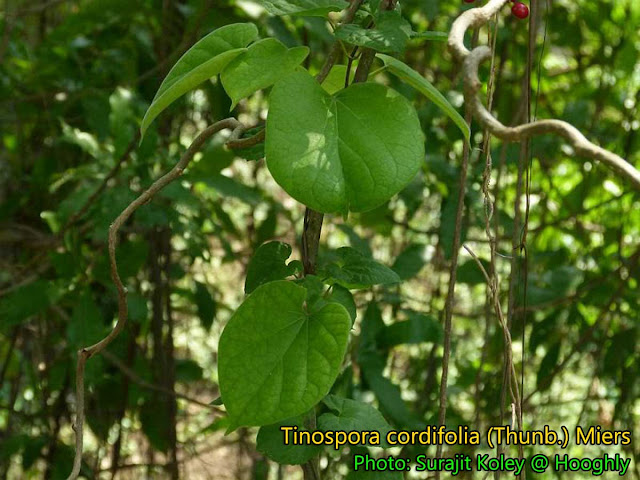 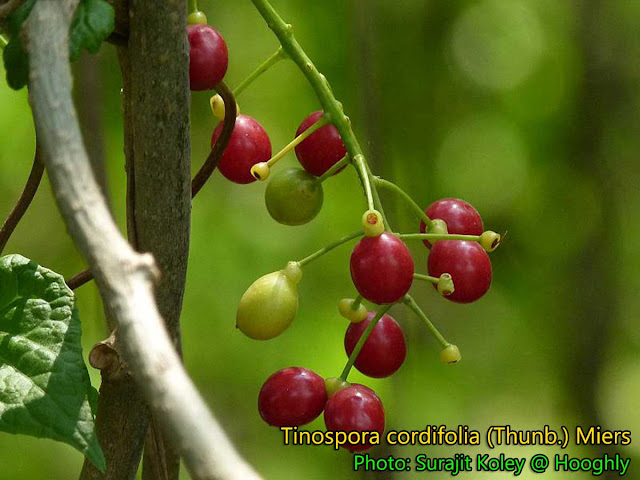 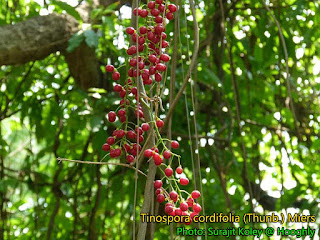 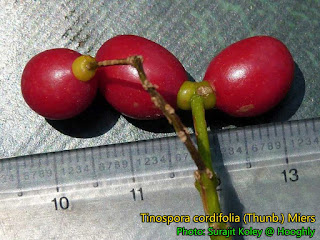 
Parts used: Stem and Leaves: The plant is used in general debilities, dyspepsia, fever & urinary disease. The leaves are good as fodder for cattle and rich in proteins and fairly in calcium and phosphorous. A decoction of the leaves is used for the treatment of gout. The young leaves bruised in milk, are used as a liniment in erysipelas. The leaves are beaten with honey and applied to ulcers Dried & powdered fruit mixed with ghee or honey is used as a tonic and also in the treatment of Jaundice and rheumatism. The root is a powerful emetic and used for visceral obstructions. Its watery extract is used in leprosy. [Advances in Medicinal Plants, 2009 by Sandhya Agrawal, Oxford  Book Company, Jaipur, India ]

Ethnomedicinal uses: To treat piles, the swollen portion of the rectum is ﬁrst washed with a leaf extract of Neem (Azadirachta indica) and then smeared with a bark paste of Tinospora cordifolia. Stem pieces are eaten raw to treat rheumatism and diabetes. A decoction of the whole plant is taken orally three times a day for 3 days to treat hepatic diseases, pneumonia, diarrhoea and periodic fever. A decoc- tion is also taken to prevent dehydration and to increase appetite. A decoction of fresh leaves is taken orally and considered very effective in treating leucorrhoea. A powder of the whole plant of Enicostemma axillare (50 g) and stem powder of Tinospora cordifolia (50 g) are mixed with jaggery (100 g), and a bolus of 1 g each is made. One bolus is taken three times a day for 3 days to treat malarial fever. [Herbal Drugs: Ethnomedicine to Modern Medicine, 2009, by K.G. Ramawat, Springer]

A cooled decoction of Guduuchi mixed with honey, or a paste of Guduuchi leaves mixed with buttermilk, was administered for jaundice. (Charaka Samhitaa, Ashtaanga Hridaya, Bangasena, Bhaavaprakaasha.) The root of Guduuchi, pounded with ricewater, was prescribed for splenomegaly. Juice of Guduuchi and Shataavari (Asparagus racemosus), in equal quantity, was given for treating fever (Sushruta); a decoction of Guduuchi, Nimba (Azadirachta indica) and Aamalaki (Emblica officinalis), mixed with honey, for irregular fever (Sushruta); a simple decoction of Guduuchi or its juice added with Pippali (Piper longum) powder for chronic fever (Vrindamaadhava, Bhaavaprakaasha). Juice of Guduuchi was prescribed for polyuria, associated with diabetes (Ashtaanga Hridaya, Shaarangadhara Samhitaa). A decoction of Guduuchi, Nimba (Azadirachta indica) and Patola (Trichosanthes dioica) leaves, mixed with honey, was prescribed in acid gastritis. A decoction prepared with 30 g Guduuchi, Shunthi (dry Zingiber officinale) and Dhaanyaka (Coriandrum sativum) was administered for alleviating gout, rheumatic affections and obstinate skin diseases (Vrindamaadhava, Bhaavaprakaasha). Regular use of juice, paste, powder or decoction of Guduuchi was recommended for gout. Amritaa Ghrita (Shaarangadhara), Guduuchi Ghrita (Vrindamaadhava), Amrityaadya Taila and Madhuparnyaadi Taila (Charaka) were specific compound preparations for gout. Guduuchyaadi Ghrita of Charaka was specific for cough. Juice of Guduuchi (including that of root and flowers), mixed with the juice of Manduukaparni (Centella asiatica), powder of Yashtimadhu (Glycyrrhiza glabra) and paste of Shankhapushpi (Convolvulus pluricaulis), was prescribed with milk as a rejuvenating tonic. (Charaka Samhitaa.) Guduuchi was included in more than ninety compound formulations of Bhaavaprakaasha. Among over-the-counter drugs, Guduuchi Sattva (Bhaavaprakaasha) is prescribed for chronic fevers, diabetes and wasting diseases; Amritaarishta (Bhaishajya Ratnaavali) for intermittent fever. Guduuchi is incorporated in a number of overthe-counter compound preparations for its antiperiodic, antipyretic and anti-inflammatory properties— Saarivaadyaasava (Bhaishajya Ratnaavali), Sudarshana Churna (Shaarangadhara Samhitaa), Sanjivani Vati (ibid) Manjishthaadi Kwaatha Churna (ibid), Raasanaadi Kwaath Churna (Sahasrayoga), Guggulu Ghrita (Ashtaanga Hridaya), Chitraka-Haritaki (Chakradatta), to name but a few. In Unani medicine, Sat-e-Gilo is incorporated in Habb-e-Tabaasheer, prescribed during fevers. It is also an ingredient in Qurs-e-Ziabetus Khaas, prescribed for diabetes mellitus. Seenthil Sarkarai (Guuduchi Sattva) is the principal ingredient of Siddha compound Sandana Podi, prescribed for diabetes mellitus. [Indian Herbal Remedies, 2004, by C.P. Khare, Springer-Verlag]

Tinospora is a common climbing shrub which is used in medicine, usually in the fresh state, though it is commercially available in the dried state. It is probably the most useful preparation acting as a tonic and aphrodisiac. As a tonic it is best given in infusion with or without milk. It is a popular remedy for snake-bite and leprosy. It is generally prescribed in general debility, diabetes, fever, jaundice, skin diseases, rheumatism, urinary diseases, dyspepsia, gout, gonorrhoea and leucorrhoea. It is a constituent of several preparations like guduchayado churna, gududyadi kwath, guduchilouha, amritarista, sanjivanivati, guduchi taila, amiritastak kwath, etc. The juice mixed with the pulp of long pepper and honey is a house hold remedy for gonorrhoea. Several oils for external applications are prepared with amrita and applied to skin diseases, rheumatic affections and other nervous complaints. A small quantity of bruised stem soaked for three hours in half a litre of water and strained combined with ammonium acetate is administered in intermittent and milder forms of fevers. It is rendered more agreeable with cinnamon, cloves and other aromatics. [Medicinal Plants, 1998, P.P. Joy et al, Kerala Agricultural University]

Leaves are use against large size boils. Method of use:  Heat the leaves gently for 1-2 minutes only tide them over boil and tide that over boil two tmes a day. [Medicinal Plants of Sindh : Indigenous Knowledge and Scientific Facts, by Atta-ur-Rahman, M. Iqbal Choudhary and Saifullah Bullo, Department of Planning and Development, Government of Sindh]

In sexually transmitted diseases, and in diabetes, etc., the herb’s juice or powder is prescribed. The decoction of the herb with long pepper and honey is prescribed for lack of appetite due to malfunctioning of liver, and in high fevers. In cirrhosis, jaundice, indigestion, vomiting, mild stomach-ache, about 10 ml juice of the herb is given with honey. In both chronic and obstinate types, it is given along with Commiphora, Azadirachta, Emblica, turmeric and Acacia nilotica. For menstruation problems in South India, stem pieces are boiled in 2 cups of water and drunk during irregular and excessive menstruation. [Rasayana: Ayurvedic Herbs for Longevity and Rejuvenation, 2003, by H.S. Puri, Taylor & Francis] 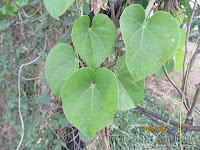 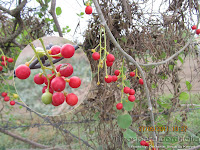