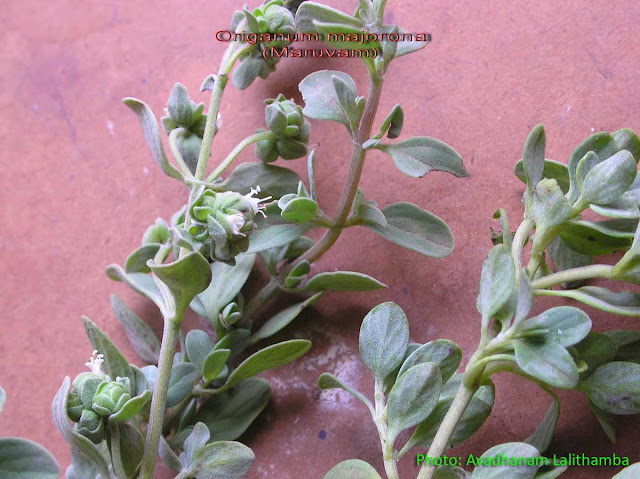 The leaves, flowers, and tender stems are employed for flavoring syrups, stews, dressings, liqueurs, sauces, vinegars, soups, omelets, sausages, stuffings, poultry, meats and seafoods. In herbal form, marjoram has been used in folk medicine as a remedy for asthma, indigestion, headache, rheumatism, and toothache. Several varied folk uses of marjoram in Middle America are outlined for such conditions as hysteria, epilepsy, muscular pain, pain of childbirth, flatulence, and ear problems. As noted by Morton, many of these uses were common in Europe and were introduced into the New World by the Spaniards. The herb has formed part of sneezing powders. The oil of marjoram has been used much like that of oregano (O. vulgare) in traditional medicine. The volatile oil has been
employed to treat flatulence, colic, and rheumatism. It has also been applied externally as a liniment for sprains and bruises, used as a stimulant  and tonic, and employed to alleviate tooth aches by placing a few drops On cotton placed on the tooth. Marjoram oil was used to promote perspiration in those suffering from measles, and was also regarded as a treatment for spasms. There are no important modem medicinal uses for marjoram. [Culinary Herbs]

Origanum majorana , sweet marjoram, is used as a sedative. Marjoram eases stiff joints and muscle spasms, including tics, excessive coughing, menstrual cramps, and headaches (especially migraines). It also slightly lowers high blood pressure. Testing has shown it to be one of the most effective fragrances in relaxing brain waves. As a result, it makes excellent calming massage oil, delightful when combined with the softer lavender. It has speciﬁc properties that ﬁght the viruses and bacteria responsible for colds, ﬂu, or laryngitis. In healing salves and creams, it also soothes burns, bruises, and inﬂammation. O. majorana is also an antioxidant that naturally preserves food. [Greco-Arab and Islamic Herbal Medicine Traditional System, Ethics, Safety, Efficacy, and Regulatory Issues]

Antifungal, Antioxidant, Antiseptic, Expectorant, Stimulant respiratory and digestive infection with strongly antiseptic and anti- microbial constituents, oregano infusion or tincture is a useful expectorant in bronchial infection, chesty coughs, and respiratory catarrh. Digestive problems such as gastroenteritis and candida infection will also benefit from the herb’s tonic activity, especially where bloating and food intolerance are present. For mouth and throat infections, including oral thrush, use the infusion as a mouthwash or gargle, then swallow. [Herbal Remedies]

Used in cooking. marjoram has a long history of medicinal use. By the Creeks as an anti-dote to poisoning and snake venom, by the Romans for stomach disorders and more recently for digestive. Antispasmodic and sedative properties. However, the oil is reputedly not suitable to use by pregnant women. The oil is extracted by steam distillation from the leaves. [Trease and Evans Pharmacognosy]