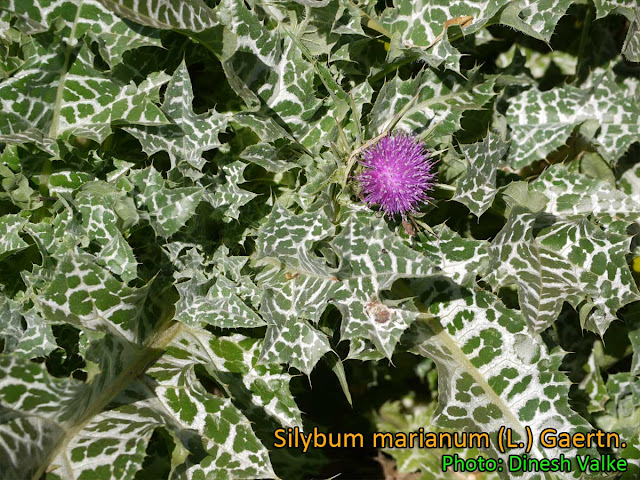 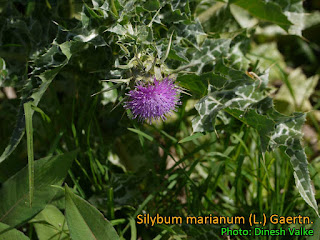 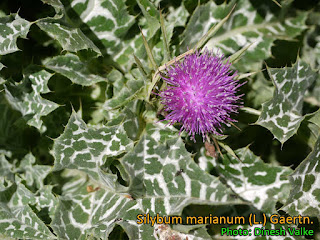 Uses: An extract of milk thistle seed is the primary botanical preparation used in Europe for supporting a healthy liver and treating liver disease. Both oral and injectable preparations are used. The injectables are highly regarded as an effective treatment against poisoning with the potentially deadly death angel mushroom, Amanita phalloides. Milk thistle seeds are generally not subject to adulteration. [American Herbal Pharmacopoeia: Botanical Pharmacognosy—Microscopic Characterization of Botanical Medicines]

Silybum marianum (milk thistle) seed is generally thought of as a liversupporting herb, but actually has all the same actions on the kidney as it has on the liver. [Clinical Botanical Medicine]

Milk thistle (Silybum marianum) is used by cirrhotic patients because of its putative ability to slow liver damage. Ripe fruit from the milk thistle plant is used to derive a concentrated extract known as silymarin. In vitro as well as animal and human studies suggest that silymarin protects hepatocytes from the toxic effects of substances such as carbon tetrachloride and phalloidin (amanita mushroom). In humans exposed to hepatotoxins, silymarin has been able to reduce the likelihood of developing more extensive liver failure. Silymarin is thought to act by the presence of a large number of flavonolignans, which work on the cell membrane to prevent the entry of toxic substances into the hepatocyte. Protein synthesis is also stimulated, which accelerates the regeneration and production of new hepatocytes. [Herbal Cures: Traditional Approach]

Traditionally, milk thistle fruits have been used for disorders of the liver, spleen and gall bladder such as jaundice and gall bladder colic. Milk thistle has also been used for nursing mothers for stimulating milk production, as a bitter tonic, for haemorrhoids, for dyspeptic complaints and as a demulcent in catarrah and pleurisy.(G2, G32, G34, G35, G50, G64) It is stated to possess hepatopro- tective, antioxidant and choleretic properties.(1, 2) Current interest is focused on the hepatoprotective activity of milk thistle and its use in the prophylaxis and treatment of liver damage and disease. The leaves have also been used for the treatment of liver, spleen and gall bladder disorders and as an antimalarial, emmenagogue and for uterine complaints. Milk thistle leaf preparations are available today, although most research has been conducted with preparations of the fruit since the leaf does not contain the pharmacologically active component silymarin. [Herbal Medicines 3rd Ed]

Milk thistle is reported to have hepatoprotective properties and is mainly used for liver diseases and jaundice. Traditionally milk thistle was used by nursing mothers for stimulating milk production, as a bitter tonic, demulcent, as an antidepressant and for dyspeptic complaints. Both the fruit and leaves are used as herbal medicine, but currently the fruit is the main target of investigation because it contains the pharmacologically active silymarin component. Standardised extracts of silymarin are also commonly used. A water-soluble salt of the individual flavonolignan silibinin is used intravenously for preventing hepatotoxicity after poisoning with the death cap mushroom Amanita phalloides. [Stockley's Herbal Medicines Interactions]

As its name implies, the seeds were taken by nursing mothers to improve the supply of breast milk, a use that remains as applicable today as in the past. It has a persistent reputation as a remedy for depressed mood. [Herbal Remedies]

Seeds—liver protective, gallbladder protective, antioxidant. Used in jaundice and other biliary aﬀections, intermittent fevers, uterine trouble, also as a galactagogue. Alcoholic extract used for haemorrhoids and as a general substitute for adrenaline. Seeds are used for controlling haemorrhages. Leaves—sudoriﬁc and aperient. Young leaves and ﬂowering heads are consumed by diabetics. [Indian Medicinal Plants An Illustrated Dictionary]

The seeds are used to treat jaundice, hepatitis, chronic coughing and hemoptysis, gall-stones and inﬂammation of the gall bladder and bile duct, liver and spleen diseases, fevers, hemorrhoids, and other diseases. Juice from the leaves is drunk as a choleretic and diuretic and to treat colitis and constipation. A decoction of the root is drunk to treat stomach catarrh. Currently, an alcohol-water extraction of the seeds is used to treat liver diseases. [Medicinal Plants of Central Asia Uzbekistan and Kyrgyzstan]