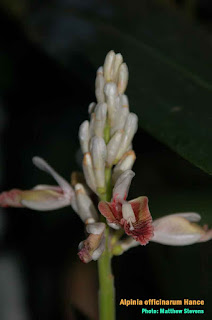 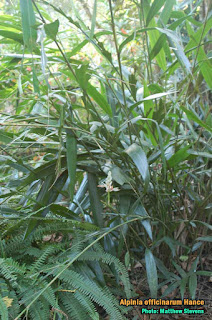 A. officinarum looks similar to A. galanga, but it is smaller in stature

Galangal is used in Thai medicine in a very similar way to ginger. Ginger is considered to be a superior herb, but galangal is more common in Thailand. As a hot herb, the galangal rhizome has a stimulating effect on the digestion, and is therefore useful in cases of indigestion, flatulence, and stomachache. It is also recommended for diarrhoea, nausea, and seasickness. Galangal is reputed to be an aphrodisiac, although this is probably due to its general stimulating effect on the Fire element. Preparation: Decoction from one “thumb-length” (or about 5 grams) fresh galangal, finely chopped, grated, or mashed with mortar and pestle. Boil 10–15 minutes; drink after meals. Topical Application: Galangal has an antiseptic action similar to ginger and may be used topically for bacterial and fungal skin infections, acne, mosquito bites, bee stings, other insect bites, and as a gargle for mouth sores. A. nigra is used for treatment of ringworm and other skin parasites. Preparation: Mash fresh galangal with mortar and pestle. Add a bit of water to make a paste; apply topically to skin. For treatment of skin parasites, add 1 part galangal to 3 parts alcohol and let sit overnight before applying. For sores within the mouth, gargle with galangal tea. [A Thai Herbal: Traditional Recipes for Health and Harmony]

A. officinarum is a very valued medicinal plant and has been in use traditionally. Its rhizome has an essential oil that is warm and spicy. It has been in use in chronic enteritis, gastralgia and the decoction is a folk remedy for cancer in Louisiana and Oklahoma.  The  rhizomes  are  considered  aphrodisiac,  aromatic, carminative,  stimulant  and  stomachic.  It  is  useful  in  dyspepsia  and  in  preventing fermentation and flatulence. It is considered a nervine tonic. The properties are more or less similar to that of A. galanga. The therapeutic effects when used in traditional medicines might be mainly due to the contents of quercetin, galangin and kaempferol. [Handbook of Herbs and Spices - Volume 3]

It is a favorite spice and medicine in Estonia and Lithuania (GMH). A salve, prepared from the root, is said to be a folk remedy for cancer in Louisiana and Oklahoma. Prescribed for gastralgia and chronic enteritis. Rhizomes are considered aphrodisiac, aromatic,  carminative,  stimulant,  and  stomachic,  being  especially  useful  in  dyspepsia,  and  in preventing fermentation and ﬂatulence. In India, it is considered a nervine tonic and an aphrodisiac. Reportedly, it clears halitosis when chewed, and sore throat when swallowed. According to India folklore, if given to children, they learn to talk earlier. Powdered with oil or water, it is said to remove freckles. Supposedly reduces the urine ﬂow in diabetics (DEP). Powder is used as a snuff, especially for catarrh (GMH), and sometimes used as medicine for cattle. [CRC Handbook of Medicinal Spices]

Rhizome—carminative (in dyspepsia), stomachic, circulatory stimulant, diaphoretic, anti-inﬂammatory. Throughout southern India, the rhizome of Alpinia galanga is used as Raasnaa for rheumatism, intermittent fever, dyspepsia and respiratory ailments. Unani physicians use A. galanga as a sex tonic. [Indian Medicinal Plants An Illustrated Dictionary]

The root is a stimulating, spicy, warming, aromatic alterative.It considerably excites the mucous membrane especially of the stomach, and its use is best in atonic and depressed conditions of the digestive tract. In hot infusion it arouses the circulation and gives general warmth. It promotes menstruation especially when the same has been checked by congestion, in either acute or chronic cases Zingiber, Asclepias or Camomile may be added as required. It has been recommended as an alterative in sarcoma, uterine fibroids, lymphatic swellings and in syphilis. [Physio-Medical Therapeutics, Materia Medica and Pharmacy]