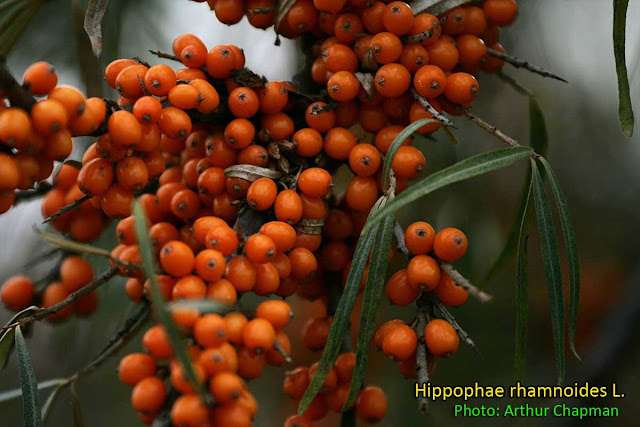 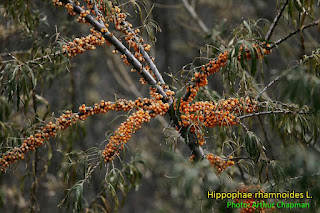 The fruit of H. rhamnoides L. is a traditional herbal medicine mainly used in Tibet and Inner Mongolia Autonomous Regions to regulate the function of stomach and intestines, and treat syndromes such as indigestion, abdominal pains, etc.  It has been well documented to have antioxidant, immunostimulative, regenerative, and antiulcerogenic properties, a protective eﬀect against injuries in mice and eﬀects on hyperlipidemic serum cultured smooth-muscle cells in vitro.  The alcoholic extracts of leaves and fruits of the plant at a concentration of 0.5 mg/mL were found to inhibit chromium-induced free radical production, apoptosis, and DNA fragmentation. In addition, these extracts were able to arrest the chromium-induced inhibition of lymphocyte proliferation. [Herbal and Traditional Medicine]

The fruits are used as an analgesic, as a remedy for stomach pain, to improve digestion, and to treat scurvy.  A decoction of the fruits is drunk to treat ulcers and is added to baths to prevent skin diseases. Fresh fruits are used to  moisturize the skin, to help heal small wounds and burns, and to treat skin diseases associated with poor metabolism. An  infusion of the leaves is drunk or the leaves are directly applied to the body to treat rheumatism. A decoction of the seeds  is used as a laxative. [Medicinal Plants of Central Asia Uzbekistan and Kyrgyzstan]

Fruit—astringent, antidiarrhoeal, stomachic, antitussive, antihaemorrhagic. SeaBuckthorn preparationsareused internally for stomach ulcer, duodenal ulcer and other illnesses of the alimentary organs; externally in cases of burns, bedsores and other skin complications induced by the treatment with X-rays and other radiations. [Indian Medicinal Plants An Illustrated Dictionary]

Topical  application  of  1.0%  seabuckthorn leaf  extract  statistically  significantly  augmented the healing process, as evidenced by increases in the content of hydroxyproline  and protein as well as the reduction in wound area when compared with similar effects  in response to  treabnent using povidone-iodine ointment (standard care).  The  reduced  glutathione, vitamin C, superoxide dismutase, catalase, and glutathione peroxidase activities  showed significant increases in seabuckthorn leaf extract-treated wounds as compared to  controls.  The  lipid  peroxide  levels  were significantly  decreased  in  leaf  extract-treated  wounds. The results suggest that aqueous leaf extract of sea buckthorn promotes wound  healing,  which  may  be  due  to  increased  antioxidant  levels in  the  granulation  tissue. [Herbal Cures: Traditional Approach]

With high levels of minerals and vitamins A and  C, sea buckthorn’s tart-tasting berries make an  ideal supplement to prevent colds and sore throats. As a natural supplement, the  juice or syrup of  sea buckthorn will  improve resistance to colds, sore throat,  and sinus problems. Rich in antioxidant  bioflavonoids, sea buckthorn supports  capillary and arterial health when taken  long-term. [Herbal Remedies]