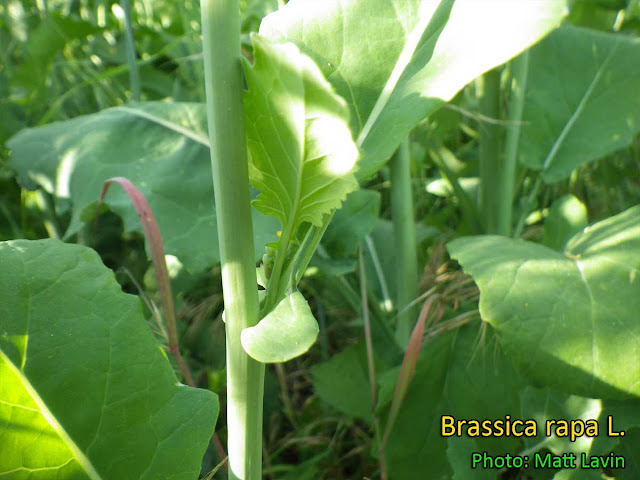 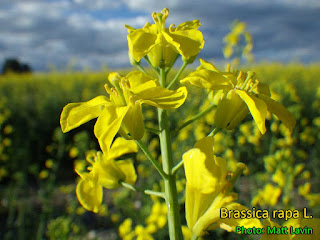 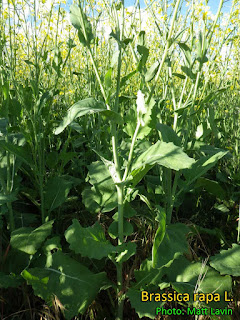 Description: This non-native plant is an annual or biennial about 1-3' tall. Small plants are branched sparingly, while large plants branch abundantly in the upper half. The stems are gray-green or gray-blue, terete, glabrous, and glaucous. Plants that begin growth during the fall will overwinter as low rosettes with basal leaves, while plants that begin growth during the spring bolt upward almost immediately. Both the basal and lower leaves are up to 10" long and 2" across, but they are usually smaller than this. They are oblanceolate in overall shape and strongly pinnatifid with undulate or bluntly dentate margins; their terminal lobes are the largest in size. Both types of leaves have stout petioles. In contrast, the middle to upper leaves are smaller in size, lanceolate-oblong in shape, with margins that are smooth or bluntly dentate. These latter leaves have bases that usually clasp their stems, although some of them may be sessile. Like the stems, these various leaves are grey-green or blue-green, glaucous, and usually glabrous – occasionally the basal leaves have short bristly hairs. The lower, middle, and upper leaves are alternate. The upper stems terminate in racemes of bright yellow flowers. The flowers bloom toward the apex of each raceme, while the seedpods develop below. Each flower is 1/3–1/2" across, consisting of 4 yellow petals, 4 green to yellow sepals, several stamens, and a pistil with a single style. The sepals are narrowly lanceolate and hairless. The blooming period can occur anytime between late spring to early fall; it usually lasts about 1 month for a small colony of plants. Each flower is replaced by an ascending cylindrical seedpod (silique) that is 1¼–2¼" long at maturity and hairless. Each seedpod terminates in a seedless beak that is about one-fourth its entire length. At the base of each seedpod, there is a stout hairless pedicel about ½" long that is widely spreading to ascending. Each seedpod divides into 2 valves to release its small globoid seeds. The root system consists of a taproot. This plant reproduces by reseeding itself.
Uses: For frost bite (of feet), rub heels with roasted turnip. Hot cooked turnips used to cure chilblains. Bound around foot for frostbite. [African American Slave Medicine : Herbal and Non-herbal Treatments]

Oil from the seeds depurative, used as massage on chest for cough and cold. Ceremonial, seeds used in marriage ceremony. [CRC World Dictionary of Medicinal and Poisonous Plants]

In Northeast India, the ﬂowers are a delicacy; they are used to make a vegetable soup. The ﬂowers are cleaned and boiled without any herbs, not even salt, and the soup is consumed in a mug along with meals. It is slightly bitter. [Edible Medicinal and Non-Medicinal Plants Vol-7]